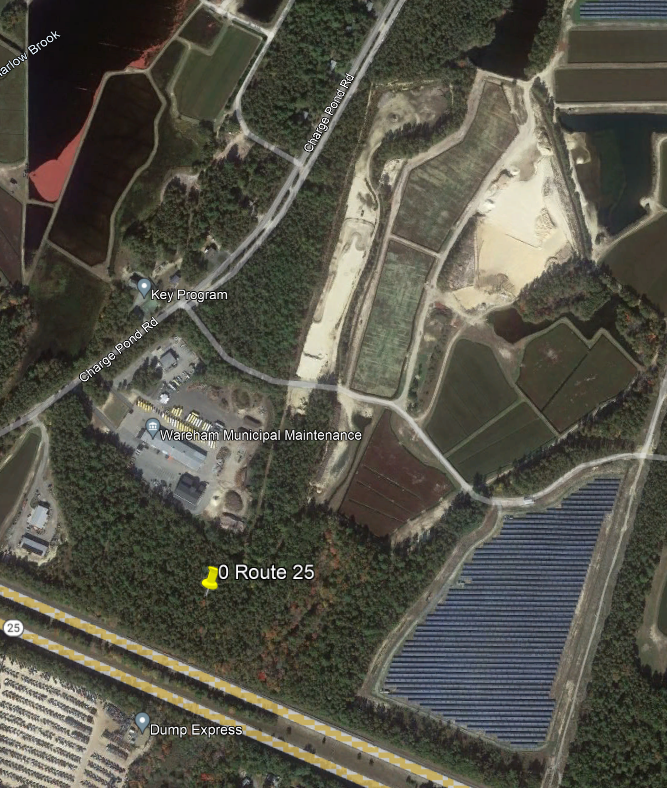 Above: Image courtesy of Google Earth, 2022 The proposed site includes the strip mined area along the cranberry bog on the west side. The trees along the mining site will be cleared.

An out of state limited liability company, Wareham PV I LLC is proposing to install a 3.5 megawatt solar array just north of Route 25, near Harlow Brook in central Wareham. The project will chop down about 21 acres of forest for the proposed large ground mounted project.

According to the consultant, the southern portion of the site consists of a pine canopy with a dense shrub understory, aka the rare Pine Barrens ecosystem of southeastern Massachusetts. The Pine Barrens are a unique ecoregion found only in Southeastern Massachusetts, Long Island, and New Jersey; the Massachusetts forests support over 200 state and federally listed species. Cutting down another 21 acres of this rare wilderness threatens the viability of the entire ecoregion. 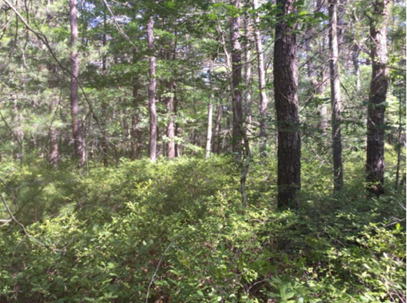 Image of the site courtesy of VHB

According to the consultant, the site soils consist of glacial outwash deposits which consist of loamy sands, and fine sands, and the depth to groundwater 44 to 50 inches at the seasonal high water table in March – April. Site groundwater is recharged by precipitation – rainwater and snowmelt. Therefore, according to the consultant’s own report, this site sits atop the Plymouth-Carver Sole Source aquifer, the only source of drinking water for five towns in southeastern Massachusetts. 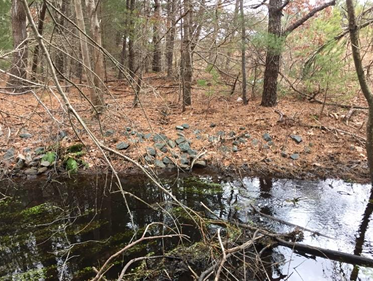 Image of the site courtesy of VHB

Wareham has lost over 300 acres of forest to solar development in the last five years. No comprehensive hydraulic study has been conducted for the Town of Wareham on how the removal of up to 300 acres of forest in the Town will affect the Town’s drinking water supply. We cannot have any more threats to the drinking water of Wareham residents and beyond. Residents, particularly downgradient residents who get their drinking water from private wells, are speaking out about how these proposed solar projects are threatening their water supply.

A citizens’ activist group submitted a Citizens’ Memorandum to the Wareham Planning Board, calling for the Board to oppose the site:

This solar site, in addition to three other proposed solar sites currently before the Wareham Planning Board (91 & 101 Fearing Hill Road, 27 Charge Pond Road and 150 Tihonet Road), together threaten 144 acres of rare Pine Barrens forest in Wareham. Forests are a critical part of of our climate solution, and the Pine Barrens give Wareham its unique character. Why should Wareham stand for this?

At the December 12, 2022 public hearing of the Planning Board, the solar developer was faced with questions from the Planning Board. The Board wants more information about the costs of decommissioning of the project, and the location of future disposal of the solar panels. They rejected the application and requested that the decommissioning plans be updated to reflect more realistic costs. During the hearing, expert hydrogeologist Scott Horsley presented the board with his findings of the site, which include the potential for a heat island effect from the solar panels and loss of forest cover, reduction in evapotranspiration, and potential for groundwater mounding. He called for an independent study of the hydrology of the site before the plans were voted on. His testimony was covered by the Wareham Week. The hearing was continued.

At the continued Planning Board public hearing January 9, 2023, the solar developer again faced questions. The Planning Board continued the hearing again deciding there were too many unanswered questions about the project. The Board was not satisfied with the decommissioning proposal – they wanted the applicant to up the bond from $800K to $2.2M. They also stated that construction cannot begin until after the applicant receives an interconnection agreement – which the applicant currently does not have. The Chair also expressed concerns with potential groundwater contamination – from both the panels themselves and the battery storage unit – and stated that monitoring wells would be a requirement for the project.

During the course of the public meeting, it was revealed that the BESS – battery energy storage system – would transfer energy two ways, both transmitting energy from the panels to the grid and receiving energy from the grid. This was a new development, which the Board was not yet aware of. One of the members stated that Wareham did not have the laws in place yet to regulate such a system. The Board also stated that the BESS would be held to the same safety requirements as the proposed BESS at Fearing Hill.

The public hearing was continued until February 13, 2023.

Sign the petition for a statewide moratorium on destructive ground-mounted solar!